The content of this article is based on fictional information, not actual data.
Lakeland Springs
Town

Lakeland Springs, colloquially known as Tumbleweed, is a town that sits on Marble Lake not far from Chinchilla. It experienced a large population boom from 1956-1962, in which the population of the town grew to over 5,000 and saw nearly 20,000 tourists a year. Today however, the town is a shell of its former boom days with many lots and building left abandoned and derelict. The towns priciple airport, Lakeland Springs Regional Airport, is located a few miles to the southeast of the town center.

The earliest known information on Lakeland Springs is dated to 1932, in which a survey by the Marble Mountain Government acknowledged a small town at its current location known as Coello Flats, with a population of around 47 people. Only a small increase in population was noted per year - usually only by 4-6 people. In 1950, slightly before its population boom, there were a recorded 200 inhabitants.

In May of 1945 the unincorporated town of Coello Flats and the surrounding region was subdivided into the new township of Lakeland Springs, shortly followed by an influx of infrastructure projects and subsequently residents looking to buy their getaway summer lake houses.

In 1951, known celebrity Mac Rowett visited the small tourist destination as part of a television program called The Marble Mountain Showcase and occupied a unit there for 2 days. During this stay, he noted the small number of tourists, beautiful beach, and a relaxed lifestyle.

Rather ironically, this led to the exact opposite becoming of the city. Within 5 years since the television special, its population exploded by over 2500% to a population of 5,000 and 20,000 visitors a year due to multiple marketing stints, more television specials, and millions of dollars of investments into building large hotels down its main street. The remaining original citizens became pushed out of the town centre as companies forced there way onto the land and moved into small (considered temporary at the time) houses on the edges of the hotels. Roads were laid out for even more hotels, some of which were never paved.

During this time, the Coello Music Festival (Simply known as "Coello") began and rapidly became the largest music festival in Canifrina. It now serves as its only real attraction, hosted every August.

But its name as a tourist hotspot fell as quickly as it started. A lack of proper infrastructure, multiple quickly-built investments and dirty public spaces led to the phrase "As bad as the beaches of Coello" become common. In 1963, about 2,421,000 people visited the town yearly - but by 1968, just 5 years later, only ~1,000,000 people visited a year (Based on the number of people staying for at least one night at a hotel). Nearly all once modern and shiny buildings had quickly become dilapidated and abandoned as investors pulled out. Only a select few hotels remain open. Now, Lakeland Springs average around 150,000 tourists a year.

Despite official estimates, the tourists staying yearly surrounding Lakeland Springs has increased steadily since 1970 due to the Coello Music Festival. The majority of visitors stay in tents on the western edge of the town, a short walk away from the festival. The people that come to the festival usually stay away from the centre of town, which explains why the Chinchilla Regional Council's economy is booming even though its so-called largest town is largely empty.

60,000 attended Coello Mars (2019), the largest gathering in the Coello area ever reached, only second to Coello 2000, its Millenia Celebration. 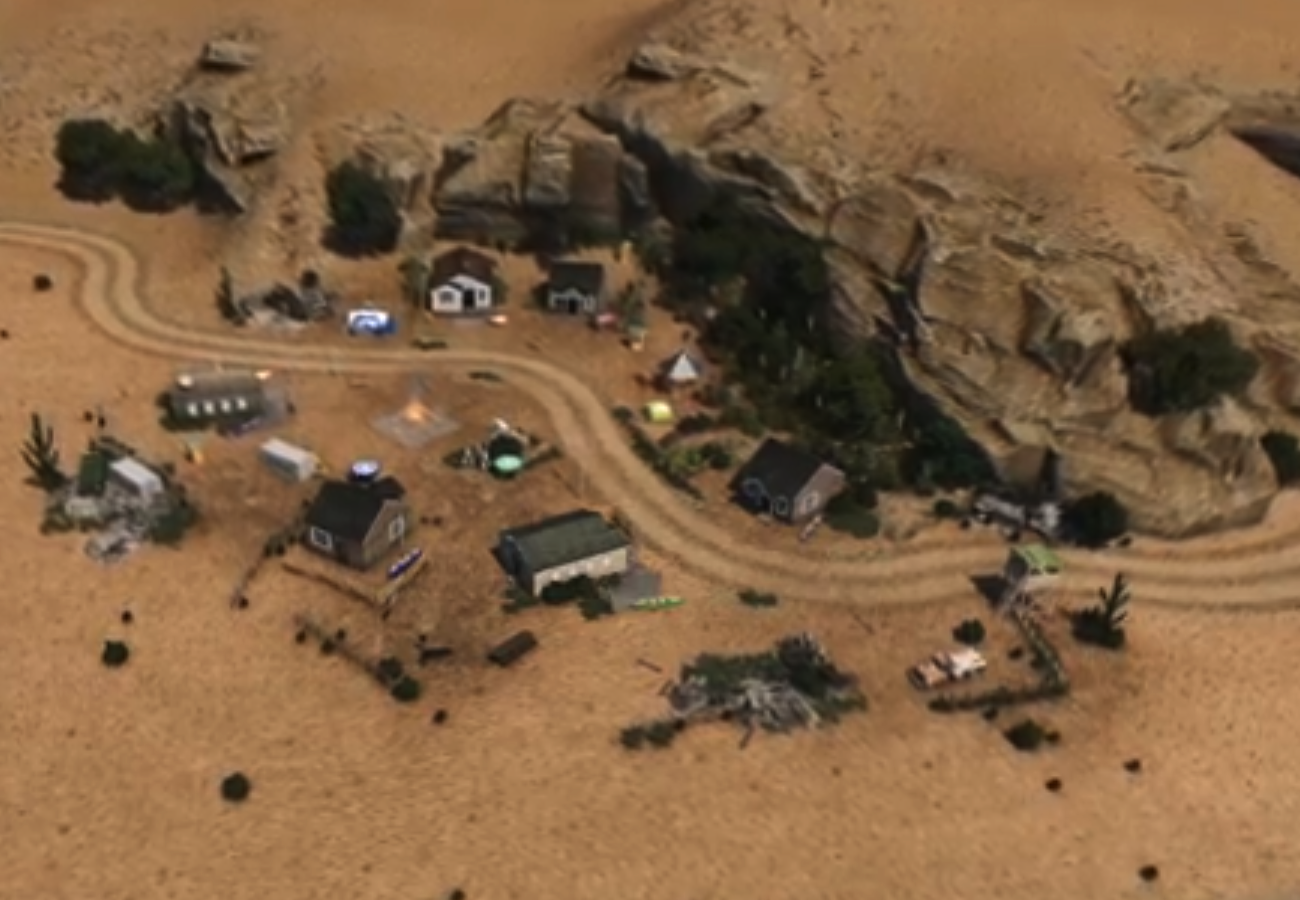 Named after the rumors that have surrounded the town, Scuttlebutt is a small makeshift village on the edge of Marble Lake near Lakeland Springs. A popular spot for bikers and tourists. You'll often see campers and busses traveling to the area trying to find a spot to park and enjoy the lake. Although, the tourists are in for a rude awakening when they arrive to find out locals don't even want to visit. Bikers use it as a haven, an out of the way place they can stick to their own business and not be bothered. Although the Sheriff's department has visited on a few occasions; the crime level is kept to a minimum. The locals do a very good job at escorting any trouble makers out of the area and have been known to watch over Tumbleweed as well. They do such a great job at policing themselves that the small gas station near the edge of town is oddly one of the cleanest and safest establishments in the region. It's best to view the town from a boat and keep your distance to avoid any confrontation.